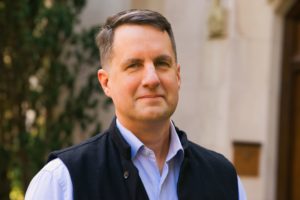 Prior to joining MSU in 2015, Jon Keune was a postdoctoral fellow in the India Studies program at the University of Houston and in the Centre for Modern Indian Studies at the University of Göttingen in Germany.  His main field of research is in west-central India, where he lived for several years, and he has comparative interests in central Europe and East Asia.

Keune has mainly focused on the development of popular, devotional (bhakti) Hindu traditions, especially the Varkari tradition and its hagiographical literature in Marathi between the sixteenth century and the present.  His book Shared Devotion, Shared Food: Equality and the Bhakti-Caste Question in Western India considers the tension of bhakti traditions between caste hierarchy and spiritual equality.  He co-edited a volume on bhakti traditions and their many others, Regional Communities of Devotion in South Asia: Insiders, Outsiders, and Interlopers.  Keune has published many articles in journals, edited books, and encyclopedias about Hindu devotionalism, Marathi hagiography, Hindu-Christian encounters, and German orientalism.

Keune’s new research has taken a transnational turn and includes learning Mandarin Chinese.  He currently is studying the emergence of transnational networks among Buddhists in India, Taiwan, and Japan, and especially the legacy of Dr. B. R. Ambedkar in these international developments.

He co-founded the Regional Bhakti Scholars Network, a platform which brings together scholars of various Indian regions and languages to explore patterns in literatures, traditions, and theologies that come under the umbrella of devotional Hinduism.  As part of this work, he co-directs a collaborative effort to develop the Bhakti Virtual Archive (BHAVA).  He is also active in the Maharashtra Studies Group and the AAR Hagiology Seminar.